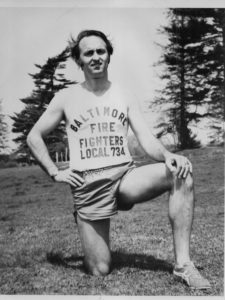 Charnie Leslie Kinion, Jr., known to all as Les, was born June 1936 in Brooklyn, NY. As he liked to say, “the other Brooklyn.”  Les moved to Baltimore with his family in 1952 when his father went to work for the American Can Company.

Les started running in 1969 and, at the time, there were only a few races in the area. He was a regular at the Towson YMCA Run For Your Life program. In 1971, Les founded the Baltimore Road Runners Club in the basement of his Halstead home in Parkville. He and three others started the first official Road Runners’ Club in the State of Maryland. He would go on and served on several early RRCA Committees in those founding years. Where he really shined was in his love of the sport and coaching others in running.  Les served on the BRRC Executive Board as President, Secretary, and Delegate from 1971 to 1998.  He was one of the first people inducted into the BRRC Hall of Fame.  That election was as much for his running ability as it was for his administrative and volunteering efforts.

Les ran numerous marathons including Boston, Maryland, and Honolulu. He ran the Maryland Marathon three times – all sub 3 hours – and twice while he was the Race Director (such a good administrator!).  For that race, he ran: 1973 – 2:55:39; 1974 – 2:56:43; and 1976 – 2:52:09. For two of those years, he was also organizing the weekly races that the BRRC would run up to these marathons. He also won two other races in 1975, including running 10:20 at the Towson YMCA’s Run for your life 2 Miles.  And in 1977, he won the RRC Eastern Regional 50 Mile Championship at Lake Montebello, beating legendary ultra runner, Park Barner.  Throughout the 70’s, Les could be found running and racing all over the Baltimore\Washington corridor.  It was also during that time that he became Baltimore’s first professional Race Director. With the help of the BRRC, he developed such successful events as the Constellation Classic, the Great Subway Run, and Baltimore Symphony race. He was most known for his role as the Race Director of the Maryland Marathon.  The director it from 1973 to 1989 and led it through many changes as the marathon world changed.  With the Legendary Satyr Hill as part of the course, he was able to host world-class athletes such and Ron Hill, Bill Rodgers, and Gary Bjorklund, and still develop an event that would boast over 2000 participants on one of the toughest marathon courses on the East Coast.  The Maryland Marathon was known as a racer’s marathon by boasting a large number of sub-3-hour marathoners.  Les was very proud of putting on a marathon that would have over 300 finishers under the magical 3:00 time, which would qualify a runner into Boston. 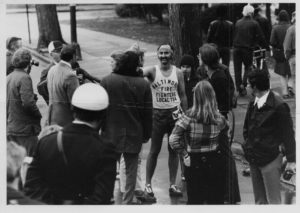 While Les’s passion was running, he evolved into quite the race administrator and race director. In the 70’s, he served on several national RRCA committees, including assuming the role of Chairman of the RRCA Publicity Committee. He served on the Race Committee for Washington’s Cherry Blossom Festival 10 miler. He also was the shirt supplier to that race for over 40 years. It seems that once he acquired a job it was pretty hard to get him to stop doing it.  Another project he was involved with was the Biannual ten mile runs in Ocean City. He directed the Ocean City Sun Run and Seaside 10 for over 20 years, with the Seaside 10 still being run under a local company now. We sometimes joked that it was a reason to get out of Baltimore. Later, it became a reason for all friends to get together in October and just enjoy a good old-time race.  The races were so popular because they were fun.  The starts and packet pickup were for the most part comprised of an extended running family that worked together month in and month out. Races would roll through as interesting as the possible course that the T and T department would let him use.  Of course, most races featured what would nowadays be called an after party – usually bagels, Gatorade and beer (as much beer as possible).

In the 80’s, Les had developed a thriving race directing business at a time when there were no other people willing to take on putting on events for others. While he passed the torch to other Club members to direct some of the smaller events, he still directed the Club’s Constellation Classic and Subway 8 Miler.  He also directed quite a few other races, such as the AFram Festival 5K, Gadget’s 5K, 5 Smiler Dental Race,  Union Memorial Hospital 5K, Police Chases, Stadium to Stadium Run, St Patrick’s 5K, and Oriole Advocates 5K Run, to mention a few over the decades.   All told, over many years Les worked on or directed close to a 1,000 events. When he was not the Race Director, he as the Club Secretary and would secure the Permits with the City or County.

As Les entered the 1990’s, the Maryland Marathon had completed its run and he was now a full time retired Fire Fighter and full-time Race Director.  He enjoyed spending more and more time in Ocean City and Fenwick Island.  He was still active in the Club but less and less in the Baltimore racing scene.  In the Mid 90’s, he bought a fantastic home in Bishopville and moved from the longtime headquarters of Baltimore running in Parkville.  He became a gentleman pontoon boat captain and started enjoying the quieter life. He still put on his Seaside 10, or whatever he needed to call it to find a sponsor.  But it was the quieter life.

In recent years, He took care of the love of his life, Joyce, until her passing several years ago and, while he really could not run anymore, he was an avid walker. He developed a tough schedule for himself of walking several miles every morning.  And every weekend he was free or didn’t have anything pressing, he could be found volunteering for the Delaware running community in their weekly races. 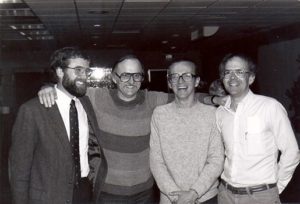 Les was in the first class of the BRRC Hall of Fame.  Given his contributions over the years to keep the club running, that would be enough for most folks, but he was more interested in his running times and performances.  He was always encouraging others in their efforts, even when they doubted their own abilities.  For his own times in the 70’s, he was quite proud to own his sub-3-hour marathons, especially since three were run on the toughest course on the East Coast at the time.  And, always with a smile and a good word. Les Kinion was first class all of the time and we all were much richer to have known him and run with him. You did right, Les. Thank you.