Denise Knickman is a familiar face to many of us, but you may not really know what makes her so deserving of this or any previous awards she has received because she is the quiet, humble winner of her achievements.

I want to share Denise’s story as told by herself.

I moved to Baltimore in 1992 after physical therapy school so I’ve been a club member since about 1993.  Maureen Hall was one of the first club members I met while joining in on the Wednesday night runs from Hopkins and she encouraged me go join the Baltimore Road Runners Club.

I have participated in almost every type of running event the club offers including road races, cross country races and track races.  Joining the club was a great decision as I have met so many supportive, fun, and inspirational people.

I started running competitively in high school when my gym teacher, who was an assistant cross country coach, encouraged me to join the cross country team which I did in my sophomore year.   I went on to run indoor and outdoor track and under the coaching of Dan Rincon (a winner of the Cherry Blossom 10 miler, and Annapolis 10 miler as well as runner up at the Maryland Marathon).

I went on to run at the University of Maryland moving up in distance from the 1500m to the 5K and 10K under the coaching of Charles Torpey and Dan Rincon.

Inspired by my superhero, marathoner coach, Dan Rincon, I dreamed of running a marathon one day.  I ran my first of 30 marathons while in PT school, The New York City marathon, because several classmates wanted to run a marathon.  Having grown up near DC, I was inspired to run the Marine Corps Marathon a few years later and ran a 15 min PR.  I trained a little harder for the Chicago marathon in 1998 and ran a 13 min PR to qualify for the US

In 1999, I received the award for female long-distance runner of the year from the Potomac Valley Association of the USATF. I set just about every PR that year (see PR’s below).

I have volunteered for the club in several ways. I helped coach the women’s training program in the first few years and gave educational talks on topics like injury prevention. I’ve been a volunteer at club races. I have served as a delegate and vice president. I have helped with the NCR marathon and the Baltimore Marathon water stop. 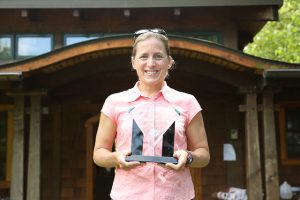 Denise is a highly decorated member of the BRRC. She has won the Female Runner of the Year award in

Denise won the female Runner of Decade spanning 2000-2009. With that recognition she joined some very special company—Marge Rosasco, BRRC’s “First Lady” of running, having been awarded this honor in the past.

Denise has logged all distances in her running career and her race results have included significant first place female finishes and consistent pace per mile times in the 6-6:30 range.

She has drawn inspiration from Joan Benoit Samuelson, acknowledging “I was very inspired watching her run in the first Olympic women’s marathon shortly after her knee surgery. Running with bold tactics. She is a strong woman role model who loves the same sport as me.”

Just so you know she is “human” like the rest of us, yes, there are injuries…. plantar fasciitis, Achilles tendonitis, HS strain, ITB syndrome, bursitis, peroneal tendonitis, lis franc injury of the foot, ankle sprains.

Denise’s interest in exercise physiology and her career in PT led her take notice of the Nike Breaking2 Project (2016). Given the opportunity to do so, she states, “With regards to running, there is one group of scientists I’d like to meet. They worked on Nike’s Breaking2 Project and include Brad Wikins, Brett Kirby, Phil Skiba and Andy Jones. I’ve always been fascinated by exercise physiology and exercise science. I would like to learn from them what physiological and biomechanical evaluations they did to select the athletes for the attempt and how they used the data to set up training programs or modify their training programs.”

Denise is one of the BRRC’s outstanding ambassadors for running and sportsmanship. And, for as long as she is able, she expects to continue enjoying her running career.