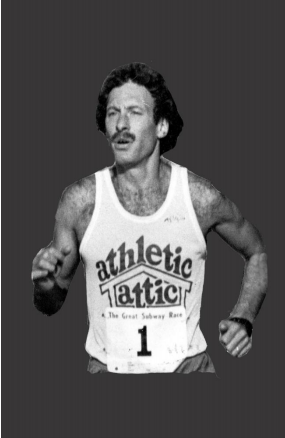 As the years press on, we have seen the running landscape change in a variety of ways—bolstered by technology, marketing, economics, and competing sports.

Perhaps, though, it was those “good old days” when running was rooting itself as an upand-coming sport that features the heart and soul of some significant achievements. This year’s Hall of Fame candidate dates back to the early 80’s when he first joined the Club. While he may be an unknown face and name to many of you, not unknown will be the familiar sense of work ethic and goal setting that many of us share in our love for this sport.

While a talented athlete, sense of pride remains a modest one for this gentleman whose hard work and perseverance were the foundation to his success.

Harry Goodman started running in his early 20’s. He has run for over 25 years, 20 of them being in serious competition. He competed seriously until age 44 or 45 and then turned to triathlons for a few years. He still runs today for enjoyment.

As a novice on the running scene back in the early 80’s, Harry remembers Marge [Rosasco] beating him in his very first race. He admits, “It took me some time to finally pass her!” Speaking of Marge, he acknowledged ‘she could be counted on for giving some good training advice’.

Harry was a competitor on the local, national, and international scenes. Among the races that highlighted Harry’s career are the following:

However, he counts as his most coveted award the BRRC Runner of the Decade for the 80’s. Harry was recognized for his many years of hard work and struggle to achieve this significant level of accomplishment.

To be sure, Harry should be proud of the goals he has achieved. But it is important for you to know this

: “The BRRC was the only running club I ever belonged to because I felt our Club was not geared toward the elite in races but rather to the masses. I felt we taught about the health and enjoyment of the sport that other clubs did not stress enough”.

“Along the way I tried to set new standards of achievement, much the same way Marge did in the women’s division. I would prefer to not only be remembered for the races that I won, but for the fact that I represented the BRRC with a level of sportsmanship and dignity that would put our organization in a class by itself”.

Congratulations, Harry, on being inducted into the BRRC Hall Of Fame.