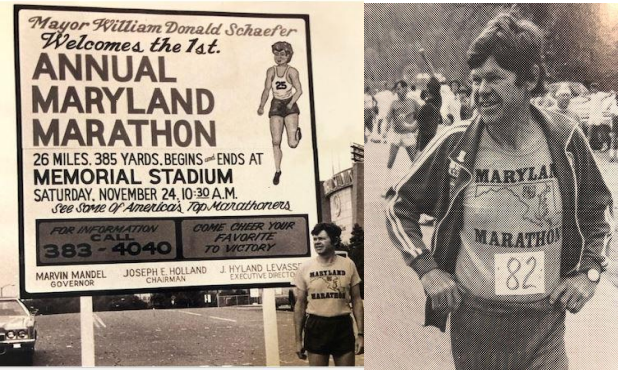 Joe Holland became interested in sports during high school where he won several medals in cross-country and was awarded the “Lion’s” medal for Outstanding Athlete of the class of 1940.

It was April of 1940 when, after completing a 54 second quarter mile on the cinders at the Penn Relays at Philadelphia’s Franklin Field that Holland thought, “Thank God that’s over!” Although he competed in a few meets after the 1940 Penn Relays, his running career was largely dormant for the next 28 years.

It was not until age 46, after reading an article on aerobics in the Reader’s Digest written by Dr. Kenneth Cooper that Joe started running again. In the late ‘60’s many running careers started at the Towson YMCA Run For Your Life program. A two mile run was held every Sunday and the results were posted in the Baltimore Sun.

The 1970 Boston Marathon had only 1,000 runners; Ron Hill won the race in 2:10:30. Joe and his cohorts were excited by what they had seen in Boston and especially impressed by the “roar of the crowd” gathered to celebrate Patriot’s Day. On the plane ride home, Joe talked to Les [Kinion] about getting some of Boston’s class runners to attend Charm City’s races to generate more local interest in the sport.

He and his buddies continued to travel to the Boston Marathon each year in addition to attending RRCA meetings. Joe remembers that the RRCA’s President, Vince Chiapetta, “a powerful guy”, gave the Baltimore area runners a lot of encouragement.

Finally, on September 22, 1971, the first meeting of the Baltimore Road Runners Club took place at the home of Les Kinion. In attendance were Kinion and his wife, Joyce, Merle Hamrich, Tim Giles, and Club co-founder, Joe Holland. Les was appointed president and Joe was VP. This handful of charter members were the first officers and composers of the BRRC’s constitution and by-laws. The first Club race was the Layne
Half Marathon at Lake Montebello on December 18, 1971.

In October 1972, Maryland Governor Marvin Mandel appointed Joe the chairman of the Maryland Planning Commission and charged him with bringing a major race to the city of Baltimore. Holland served the commission for six years, eventually building the Maryland Marathon to 2,000 finishers. An early supporter of women’s rights, he offered to pay the expenses of female runners to encourage them to participate in the race—a breakthrough recognized by 1973 and 1974 Maryland Marathon winner, (and Woman Runner of the Decade), Kathy Switzer.

After his appointment by the Governor, Joe and Les joined Harry Kaufman and Hy Levasseur, who led Maryland’s Commission on Physical Fitness, to create a program for local runners interested in training for the Maryland Marathon as well as to draw class runners from outside Maryland and the U.S. They felt such a program was a necessity; otherwise, Maryland’s Marathon would have been “just another race”. Some
BRRC members joined World Record holder in the mile, John Walker (NZ), for one of these Saturday morning marathon training runs.

It was Holland’s determination along with the Kinions’ hard work that made it possible to establish these two groundbreaking events in Maryland running within the same 12 month period. WBAL became the chief sponsor of the Maryland Marathon with other monies received from state, city and local sponsors.

The marathon course was established as out and back from Baltimore City’s Memorial Stadium to Peerce’s Plantation in Baltimore County—26.2 miles that included the challenging Satyr Hill. The race attracted runners such as England’s Ron Hill and Chris Stewart, Canada’s Jerome Drayton, and Boston’s Bill Rodgers. In later races, organizers were fortunate to have Liana Winter from East Germany sign on. Marge
Rosasco, who won the race in 1983, also helped in attracting quality women to compete as did Marilyn Bevans who won the race in 1977 through 1979.

For his efforts on behalf of runners and for serving as chairman of the first and second annual Maryland Marathons, the South Atlantic Association presented Joe with the C.C. Jackson Award in 1974.

For eight years Joe served on the Board of Directors of the Maryland Senior Olympics Commission. He ran his first national race in St. Louis on June 27, 1987. To date, he has run 42 marathons, including 13 Boston Marathons. His personal best in Boston was 3:13:34 at age 60. He has run more than 500 road races, winning his age group in more than 100 of them. He has trained 50,000 miles over 23 years and has found $1,200 in coins and paper money while running across the country.

After retiring from his 37 year career as Director and corporate officer at C.R. Daniels, Inc, Joe volunteered at the National Aquarium in Baltimore’s Inner Harbor. A former U.S. Merchant Marine who had worked on Liberty Ships back in 1943, Joe heard that seamen were needed in Southeast Asia in 1990. He took a job with the government of Kuwait on one of their naptha carriers. Still hooked on running, Holland trained on the
deck of the 750-foot ship—seven laps to the mile. When Iraq invaded Kuwait, the ship’s cargo was changed to helicopter fuel and the Gulf War had begun. Sixty-eight-year-old Joe Holland was on his second war, yet he never heard a shot—”unless you count the ones that went into glasses” he quips with trademark humor.

Mike Znidar wrote in the Baltimore News American [7/11/1984]: “Joe Holland has never won a Boston Marathon, competed in an Olympic Games, been a college All-America, or had his picture on the cover of Runner’s World magazine, but when he speaks, the running community should pay attention”.

Selfless commitment and dedication to service and sport highlight the achievements Joe has mastered in shaping the BRRC and the Maryland Marathon Legacy. His unwavering determination and early vision set the course for the Club we enjoy today.

Congratulations, Joe, on being inducted into the BRRC Hall Of Fame. Your award is well deserved.