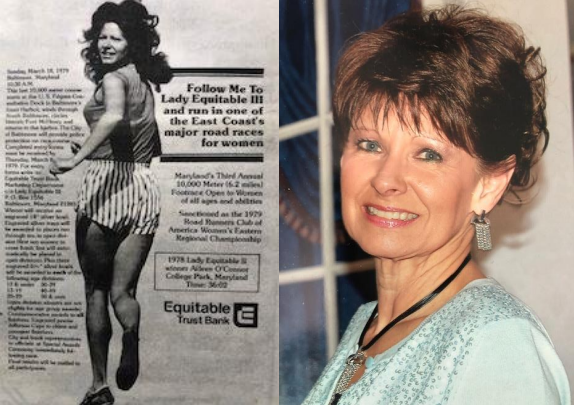 The BRRC has elected Marge Rosasco to the inaugural class of the newly established BRRC hall of Fame. It is not surprising that Marge would be an ideal candidate to be recognized for her talent, service, and contributions to women’s distance road running and the running community.

Marge set U.S. age records for the 20K, 10 miles, 15K, and 5K, breaking two of her own records in that series. Modestly she will admit that these records have probably been broken.

Her titles and honors include winning the 1983 Maryland Marathon, 1986 Richmond Marathon, two-time winner of the Harrisburg Marathon, RRCA National Champion for the 20K and 10 miles (1979, 1982), and RRCA Eastern Regional Champion for 10 miles in 1983. The Aegis newspaper named Marge its Female Athlete of the Year among all sports (1983). The BRRC selected her the Female Runner of the Year for 10 consecutive years, 1978-1987, and Female Runner of the Decade in 1990.

One of a select field to run in every Constellation 10K, Marge was the women’s winner 7 times with a best of 34:53 (1981) and captured two Master’s women’s titles.

Winning is relative. Perhaps it is not being the first to cross the finish line but rather accomplishing a personal goal of a different sort. Undaunted by heat and humidity, Marge regards the Falmouth Road Race (7 Miles) in 1978 as one of her best where she posted a 41:03 number 5 position behind number 1 Joan Benoit and ahead of Boston Marathon champion, Gayle Barron.

Remember the ecstasy in nudging seconds from a finishing time to beat the next minute to register on the clock? How rewarding it must have been for Marge to break 35 minutes for the first time in the Pepsi National 10,000 Meter Championship in 1978. Her 34:54 finish was second by about 100 yards to Mary Decker—10 years her junior!

Marge’s running skills earned her a spot on the Brooks Running Team for 15 years. Impressive as her personal records have been at all distances, including Master’s competition, Marge would not boast of her accomplishments. But these results speak for themselves.

Marge’s racing career has not been without compromise. She will admit she has had a few birthdays and she can no longer fit into her Brooks running outfits. But more serious have been Marge’s bouts with Chronic Fatigue Syndrome and neurally mediated hypotension which interrupted her racing career as a Master runner between the ages of 44-50. After several years off the running scene and an encouraging prognosis, Marge has continued her competitive streak as a “Grand Master”. We have seen her capture age group titles in a variety of local events including Gold at the Maryland Senior Olympics.

PR’s, honors, and titles aside, Marge’s impact on women’s distance running is perhaps best remembered by her efforts to establish a ladies only footrace here in downtown Baltimore. Under her tutelage, the Lady Equitable 10,000 Meter Race was founded in 1976. Marge’s professionalism and sportsmanship were assets to her directing the Lady Equitable and recruiting talent which grew to a field of 1600 runners. Although its
inaugural start was in Herring Run Park, the following year Equitable Bank sponsored the event in what was to become a major competition on the East Coast for women for many years—19 total although the name and distance changed over that time period. The only person to complete each race, Marge was an award winner every year, most notably the overall winner in 1990 at age 42. Of this race Marge quips, “Without a
doubt, this is one of my best running memories because everyone was happy for me, and, at age 42 I was not supposed to be able to do that!”

Her selfless nature and leadership highlighted her contributions as consultant and Assistant Coach for a local high school girls’ track and cross-country team. She has served as Treasurer of the Road Runners Club of America and as Treasurer of the BRRC. A natural subject for feature articles in newspapers and Garry Bjorklund’s Long Distance Runner’s Guide to Training and Racing, Marge has contributed to articles in
running magazines as well.

Marge gratefully acknowledges that her husband, Steve, coached her to be physically and mentally tough. His dedicated support combined with Marge’s motivation and talent led her to achieve nationally ranked status across all distances of road racing.

The BRRC is proud to recognize and welcome Marge Rosasco to its Hall of Fame. She has represented the Club by her highest standards and has nurtured her vision of women’s running through her running achievements and her personal commitment to the spirit of the sport.