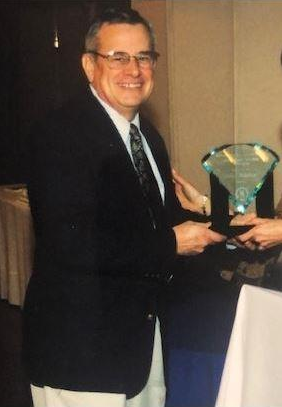 Mel Walton joined the BRRC in the fall of 1972 when there were about 15-20 members. Meetings were held in the basement of Les Kinion’s home, the Club’s founder and president. Mel recalls, “Boy, what great times we had as running was just coming of age. When they set the groundwork for the first Maryland Marathon I was hooked completely”.

Mel’s interests included working on the results of the Club and extended to managing the marathon entries. He created a Maryland Marathon results book which was distributed to all entrants. He eventually took over the Club newsletter and all the results keeping. This required him to manually type all results and lay out the newsletter from his home office before being submitted for printing.

In 1976, the BRRC recognized Mel as “Worker of the Year” and the following year he received the RRCA’s national award for “Outstanding Service to a Local Chapter—the 1977 Rod Steele Memorial Award”. At the time of his award, the BRRC newsletter was considered the best in the country. In 1981, Mel took on one final task of which he is most proud. He collated all the 1980 BRRC results into a magazine style book for all
Club members with the 100 Man 100 Mile relay World Record as the featured event.

When he joined the Club and the Maryland Marathon was in its infancy, Mel’s excitement led him to direct all his training toward the Marathon. He says, “I always felt I would have done better in the middle distances like the 10K or 10 miles, but the marathon took over my life at that time as it did for so many of us”.

A graduate of Parkville High School, Mel thrived as a middle-distance runner challenging the distances from 880 meters to the ½ mile. He claimed the Baltimore County Champion title in 1960.

Mel’s running career included 21 marathons in 8 years from 1973-1981 with his best finish being 8th place in the 1980 Finger Lakes Marathon in Ithaca, New York. He has raced 6 Annapolis 10 Milers and finished in the top 100 in each race. His running mileage averaged about 4000 miles a year over five years of records. He credits the marathon distance and Boston specifically, with its strict qualifying standards, as making
him the better and faster runner he became.

As a BRRC Executive Board member, Mel was involved in starting several Club races which are still being run today. He started the Championship Series and worked to fine tune those events to be fair to every runner and to the level at which they were competing.

Congratulations, Mel, on a most deserving recognition for your accomplishments and achievements! Welcome to the BRRC Hall of Fame.

I was privileged to be a 2003 inductee into the BRRC Hall of Fame and would like to thank those who bestowed this honor upon me. It is certainly overwhelming for me.

While I ran track in high school with my buddy, Bill Diegel, I backed away from running for a long time. When Bill returned home from his time in the Air Force, we decided we had it in us to start running again. One thing led to another and I found myself wrapped up in the newly formed Baltimore Road Runners Club. It was an exciting time when so many of us found the thrill of running—not just running but long distance and
marathons.

Early on I had the joy of running with some famous Baltimoreans: Les Kinion, Marge Rosasco, Marilyn Bevans, Joe Holland, John Romer III, Charlie Reynolds, and Harry Goodman—all BRRC Hall of Famers. And along the way I made some lifelong friends.

I had lots of stories and adventures by which to remember my friends. Though many of you may not know “this old duffer”, I continue to read the Club’s newsletter and see what talent the Club has. I wish you all well in your personal bests and hope that one day I may join you again—on a low-key level.

Thank you again from the bottom of my heart.
Mel Walton