Inside Lane with Jeremy Ardanuy 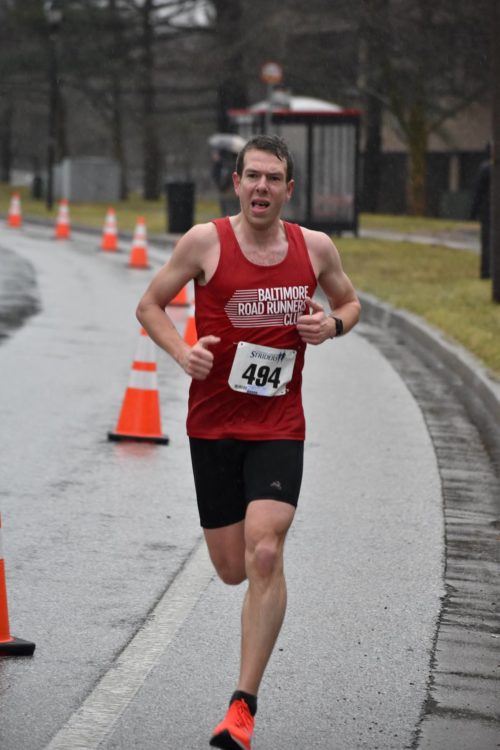 Welcome to our new feature, Inside Lane! We will be sending these to our mailing list periodically as a way to get to know other members of the club and to entertain, inspire or educate readers. We will also be looking into how to organize these on our website for public consumption. Unfortunately, the updated brrc.com did not come ready with a Member of the Month section as the prior version had, but busy little bees are working on that as we speak. I think that calling attention to specific members of our running community is fun and I think that you will enjoy reading.

This first feature is inspired notably by two things: the fantastic work that BRRC member, Glenn Smith, is doing with his Running Around Baltimore podcast – I encourage everyone to listen; the other is the absolutely standout performance of Jeremy Ardanuy at last weekend’s Maryland/DC RRCA Club Challenge. Jeremy finished 3rd overall out of a stacked field and with the highest placing of a BRRC member at this race in decades. In the bitter cold rain, the 25 year old grad student from Baltimore smoked the rolling 10 mile course in a stellar 53:29.

Impressive. Even more impressive is that he ran a 2:41 at the George Washington’s Birthday Marathon only a week beforehand as a training run. 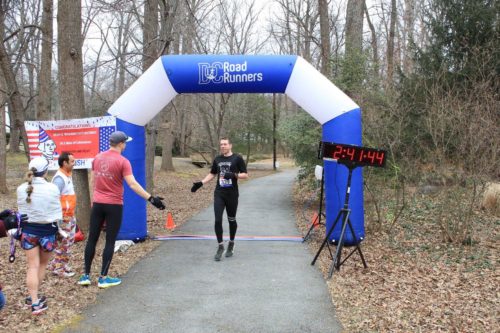 Johnny Lyons: How do your legs feel after back-to-back weekends of racing?

Jeremy Ardanuy: My legs are a little banged up, I have some hamstring tightness but nothing I’m not used to from marathon training. I felt much better this Monday than the day after the marathon!

I don’t doubt that. You ran the marathon as a training run, didn’t you? Did you get what you wanted out of it? What you were thinking?!

Yeah, a hard long run for marathon training. I certainly got the pain and experience I was looking for out of it. I’m still pretty novice to the marathon distance, having run it 5 times now with only 3 of those being race efforts, so my goal is to really familiarize my legs with the unique challenge that is the marathon.

Two weeks ago I had a miserable stomach virus that actually forced me to take my first day off of running since mid December. Essentially the whole week of training was a wash, so once I was feeling better I substituted the marathon in instead of a 22 miler I had planned and ended up feeling much more satisfied with the week of training after!

You’re a madman, but I can definitely appreciate that. So, what was your mindset going into Club Challenge then?

Well the Monday before Club Challenge, I was thinking: there’s no way I can race this next week with how my legs are feeling. But over the course of a few days my legs rebounded quite well and I started to feel close to 100% by Thursday. Then I had another setback since I was going skiing with friends up at Blue Mountain on Friday and Saturday so that left me feeling a little sore, but come Sunday morning I felt great on the warm up run and knew I could get after it and race hard.

Did you have any expectations?

I did, looking at the results from the past couple years I expected a top 10 finish with a goal of top 5. I had heard how hilly the course was and saw rain was in the forecast so that got me even more excited since I love hills and running in the rain. 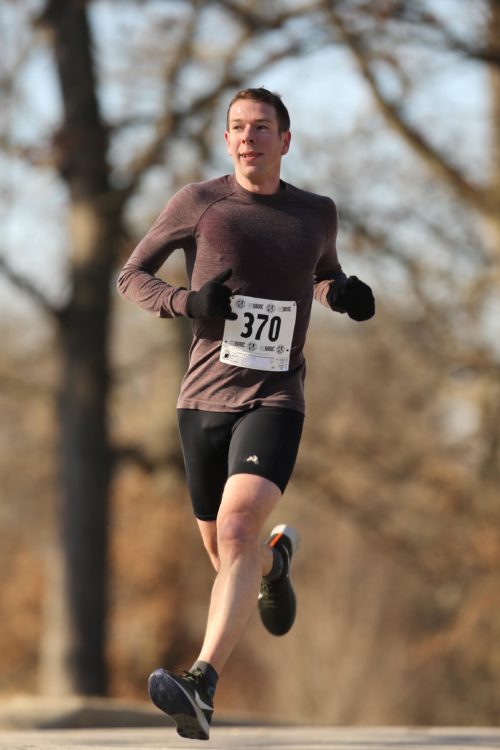 Are you fairly new to the sport? When did you start running? I know you’ve been completely shattering PRs in the past year.

I wouldn’t say I’m new to the sport, more new to this level of the sport. I actually started running when I was 8 years old, my Dad and I would go to a local trail or track and run together. Ran my first 5 and 10k that year and kept going through to the end of high school cross country and track.

It’s sort of been a fresh start in running since 2017 when I started again after essentially a 6 year hiatus. The times I’ve been hitting in the past year are many leagues above what I used to run back then so it’s been a pretty amazing ride.

Why the hiatus? What started the resurgence?

I think the hiatus was just from frustration and throwing in the towel from repeated injuries. Over a couple year span I ended up fracturing my femoral neck near the pelvis, then getting a stress fracture in my metatarsal, then another stress fracture in that metatarsal. So really just becoming tired of always getting injured and everything that goes with that.

Late summer of 2017 I decided to sign up for the Baltimore marathon, because that’s a great idea with someone who has a history of overuse injuries. During ‘training’ I ran about 10 miles per week on average and absolutely bombed the last 9 miles of the race, mostly walking, limping, and jogging to finish at 4:45 for my first marathon. I came out of that really fired up, and knew that I could do so much more. The end of 2017 is when I first started consistently training.

Woah! So, you ran 4:45 at the Baltimore Marathon the year before you ran 3rd place? How does that even happen?

As an aside, I’m a big fan of doing things that aren’t great ideas.

Yeah so I ran that 4:45, and one month later started running every day. At first I was doing 30 miles a week, then 40 and even got a couple weeks of 60 before my next marathon in March of 2018. I averaged 40 miles per week this time, much more reasonable training. My goal for that race was 3:15 and I shocked myself with a 3:00 finish. It was sort of a snowball effect from there as I continued to build up mileage and confidence in my running.

For the Baltimore training cycle I upped things even further and averaged 70 miles per week.

Sometimes bad ideas can lead to great things… sometimes not so much.

An example of bad ideas being bad was the 50 miler I ran May 2018 when I was certainly undertrained. Finished, but basically couldn’t walk for a week or two.

An ultra runner too, huh? Any aspirations to do that again?

What are your goals for the upcoming year? You’re already off to a hell of a start.

I try to keep my goals limited to the current training cycle for the most part. So until the end of April my two goals are to run a half marathon under 70 minutes and then run the marathon in under 2 hours and 30 minutes, by as big a margin as possible.

Depending how these races go, I’ll try and make some reasonable goals for the rest of the year, but for now improving my marathon time by as much as possible will be the primary goal.

That is my favorite goal and I’m going to be working on that myself.

So, I have to ask… There’s a picture floating around the internet of you drinking beer out of a trophy from your 3rd place finish at the Baltimore Marathon. Is it safe to assume that beer is your favorite post-race indulgence?

That particular day it definitely was. I took a month off of drinking leading up to the race so there was a certain level of anticipation for that beer.

Most times, pizza and ice cream are my go to post race and post long run indulgence. 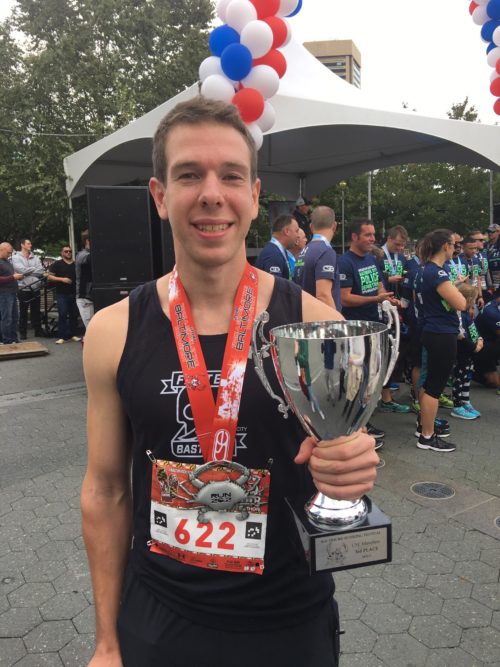 The trophy in question.

So, now let me ask you some oddball ones…

Ever yelled at aggressive drivers while running?

I’ve definitely yelled at drivers going through stop signs or not looking when turning. No real exciting stories there though.

Do you keep race bibs or throw them away?

I toss them away, usually they’re sweaty and gross. I hold onto medals though.

What’s the thing that stresses you out most about running?

For me, missing a run is probably the most stressful thing. Every time I’ve missed a run it usually is in my head for way longer than it should be.

Also, the cost of running can be stressful when running this much. I never though about how much shoes, nutrition, race entry, etc can add up to when running high mileage.

Do you have a mantra when it comes to running?

I don’t think I have a mantra, there’s not really anything I repeat in my head while running or racing. I would call it more like a motto, usually just thinking about the pain, I think “you’ll feel fine after” and that helps to keep going when you know 1 hour later or maybe 1 day later you won’t be in pain at all, so why not keep pushing.

Another quote I heard from a runner I enjoyed was “Negative splits are for runners who don’t believe in themselves” I probably like this one because it helps me rationalize my dumb tendency to start way too fast in races. 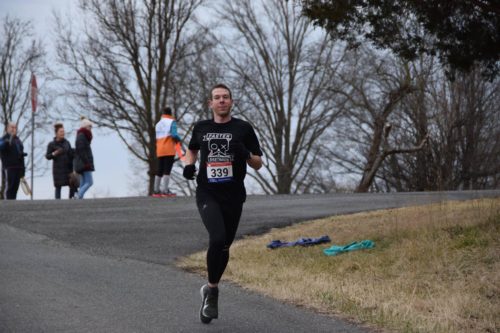 Jeremy is originally from Silver Spring and lives in the Ridgley’s Delight neighborhood in Baltimore. He is a PhD candidate in molecular microbiology and immunology at the UM School of Medicine. In addition to BRRC, Jeremy runs with Faster Bastards. You can follow his adventures on Strava and Instagram.