Inside Lane with Erin Surette 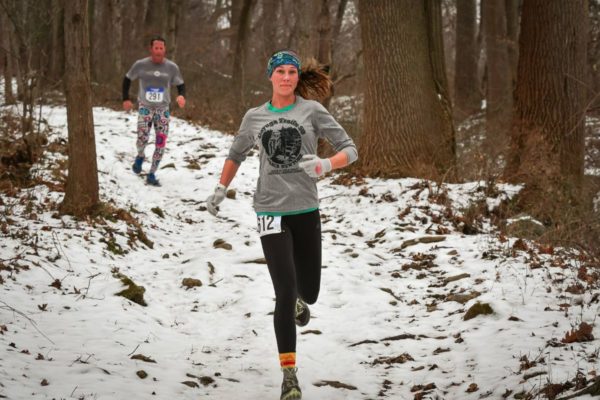 Erin Surette running to a 2nd place finish at the Phunt 25k.

We are thankful for all of the great feedback we’ve received from Inside Lane. As an update to our February issue: Jeremy Ardanuy went on to win the Under Armour KELLY Shamrock 5k in 15:20 – out-kicking the second place runner by a single second. We can’t wait to see what’s in store for Jeremy heading into the Spring.

This month’s feature will be on another tenacious local runner, Erin Surette. In addition to being a current BRRC board member, she was also the club’s Ultra Runner of the Year in 2017. Erin has an impressive history of performances in distances up to the marathon and beyond. Let’s take a look at some of her achievements from just the past 6 months…

In October, Erin ran a 3:26 at the Chicago Marathon.

A month later, she would go on to take 2nd place at the Stone Mill 50 Miler in Montgomery County. Erin skated through the sloppy, muddy track in 9:19.

In December, three weeks after the 50, she took on Hellgate – a 66.6 mile trail race through the Blue Ridge Mountains that starts in the dark at midnight. An exceptionally tough challenge that she conquered in 15:40 which was good enough for 10th place.

All of this is in preparation for Erin to take on the formidable challenge of the Georgia Death Race – a 70ish mile point-to-point race in the mountains of North Georgia with close to 28,000 feet of elevation change. Sounds lovely, doesn’t it? 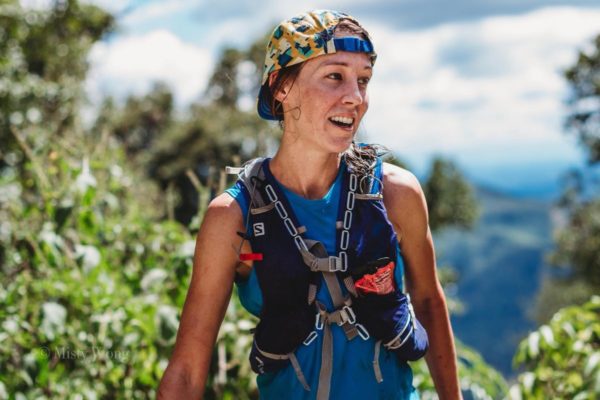 Johnny Lyons: So, why the Georgia Death Race?!

Erin Surette: Like most things ultrarunning-related, this was a “sounded like a good idea at the time” type situation, like logging on to ultrasignup after a few beers. We went down to Georgia and volunteered for the race last year, which allows you to bypass the lottery and fulfills the race’s 8 hour trail work requirement, so it seemed like a no-brainer. Plus, the course is absolutely beautiful.

Have you run any of the course yet?

Nope! I was a course marshal last year, so I had to hike a few miles out (up, mostly) from one of the aid stations. I got to see a few miles of the course as the sun was coming up. The race starts at 5 a.m. and is designed so that most of the runners hit the ridge line as the sun is rising from behind Brasstown Bald, which is the highest point in Georgia.

How do you get ready for an event like this? Does that explain the serial racing?

Dude I don’t even know. I’ve never been a training-plan-following type of person; I like to race my way into shape. That’s especially true for long races like GDR or Hellgate. I don’t have the discipline or desire to plan really long training runs, and shorter race distances like 50K and 40-50 miles are perfect for that, as long as you manage your effort. I just started working with a coach, and he has a much more sensible and informed approach to training. It’s outside my comfort zone but I’m hopeful that I’ll see some benefits.

Yeah, I’ve noticed you don’t put in a lot of day-in day-out mileage on Strava. That’s one of the things that make your accomplishments so impressive to me. You show up and smoke the competition in these “shorter race distances,” but you may not top 50 miles in a normal training week. I have noticed lately though – on Strava, again – that you’re incorporating hiking simulations and climbing stairs? Is that the work of your coach?

I can’t handle high mileage training like you can! I’ve been lucky in that I’ve never really had to take significant time off for injuries, but when I get up into the 60 mile per week range, I start to feel run down. I’m impressed by people who manage to run 90 or 100 miles a week on a regular basis, because that’s a lot of time on top of work, family, and other obligations. I suspect that it requires some level of chronic sleep deprivation, and I’m pretty fanatical about getting 7-8 hours of sleep a night.

My training has always been fairly routine. No strength training. No stretching, no foam rolling. That’s part of the reason a coach appealed to me. I know I need to do these things, and I know I’ll do them if someone tells me what to do. I needed to try something different. The treadmill/stairclimber interval workout is a perfect example. I’d never think to do it on my own, but I can already tell that it’s going to prepare me for GDR and some of the other races on my schedule way more than my typical 5 mile run would. 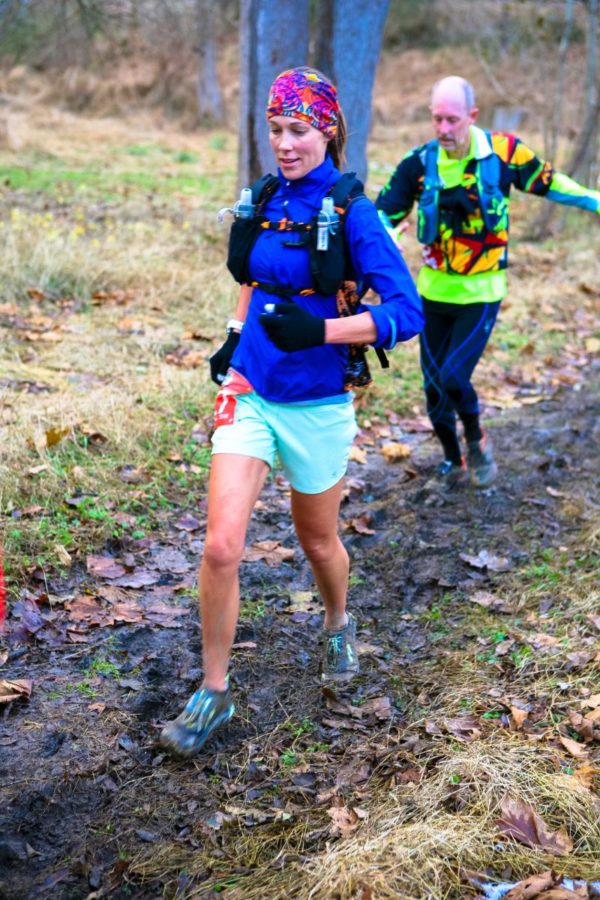 What else is on your schedule? What goals do you have for GDR and beyond?

In May I’m running the Quest for the Crest 50K, which is an extremely technical race that summits 6 peaks over 6,000 feet, including Mt. Mitchell. I think there are only 3 aid stations, and runners are required to carry water filtration devices. It’s very remote. Most of my training will be focused on this race; GDR is something I’m doing just for fun, so I’m not going in with any time or place expectations. After Quest, assuming I live, I’m running the Highland Sky 40 miler out in the Dolly Sods Wilderness, which I’m really pumped about.

Holy what in the heck?! I’m into the thought of running through Dolly Sods, but woah man – I hope you make it.

How do you find these races? What keeps you into the ‘crazy’ ultra endurance stuff?

Haha, well, I made it out of Frozen Head State Park and I think Dolly Sods is somewhat more hospitable so I should be ok.

I don’t necessarily seek out the crazy hard races because they’re hard. I have a list of races I’ve read about or heard people talk about that intrigue me. Some of them have long or interesting histories, some of them have unique elements, and some of them are just in beautiful areas that I’d like to visit. But I have my limits; races like Badwater and Arrowhead 135 seem like suffering for the sake of suffering and I’m not into that. You can keep your 100 milers, too!

I was going to ask you if 100 was on your radar. I forgot you ran the Barkley’s Fall Classic too. Rim-to-Rim, the AT 4-State Challenge – of all the races and adventures you’ve done, is there one that stands out the most?

Nah, not yet. Probably not ever but you know how that goes. Seeing the sun rise over the Grand Canyon is one of those things that can’t be described and I’ll never forget that. Probably the most fun I’ve had though is crewing and pacing people in hundred milers; we paced Pete Mulligan at Vermont which was a lot of fun, and I may have cried watching people cross the finish line at Leadville. I had goosebumps for sure.

I’ve had a lot of fulfilling experiences crewing for friends and even more so crewing for Betsy.

Yeah I’m excited to crew James in his first hundred this summer! 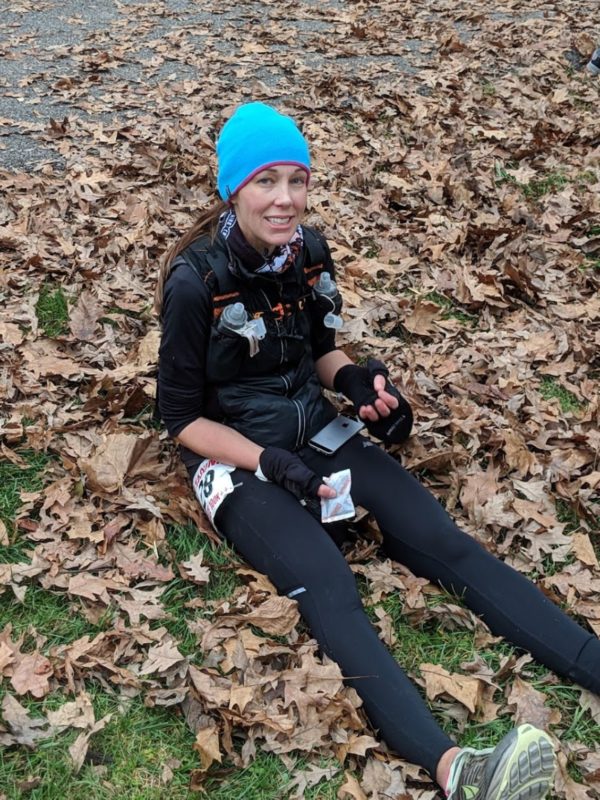 Okay, Lightning Round: running with your significant other: yes/no, good/bad, chore/fun?

Absolutely! Of course, it’ll depend on the couple and what the disparities are as far as ability level, preferred surface, that kind of thing. James and I are very different in some ways: he prefers running after work, which I hate, and he isn’t much of a talker while running. I think I’ve mostly convinced him of the benefits of running in the morning, and he is always able to change my mindset when I get grumpy during a run, because he is such a positive person. We both love making weekend trips out of races or long runs, which we do pretty frequently. But there’s always the understanding that if one of us wants to run alone for whatever reason, that’s cool too.

Do you have any bumper stickers about running?

Hitting me with the polarizing questions! I have a decent collection of bumper stickers from various races, but I have yet to put any of them on my car. I’m afraid of screwing up the placement. I’ll probably do it one day.

How many toenails do you currently have?

I’m excited to report that I have my first ever black toenail courtesy of Naked Bavarian! The nail’s still hanging in there but I guess it’ll fall off at some point, right?

What’s your favorite music to get you motivated?

Oh, man. My “motivation” playlist on Spotify is all over the place, from Verdi and Copland to LCD Soundsystem and Daft Punk. There’s a lot of opera on there. 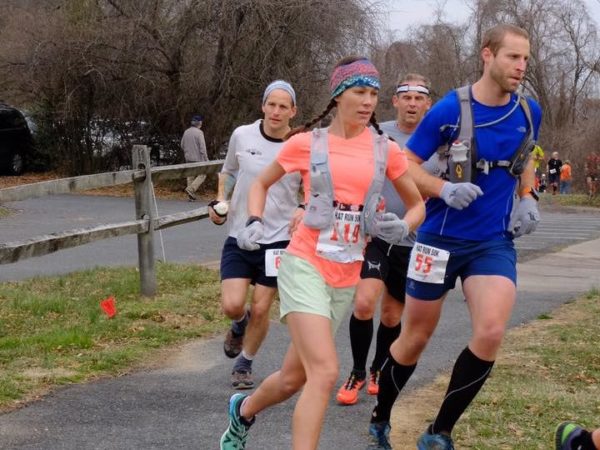 Erin lives in Towson with her boyfriend, James, a wiener dog and a cat. She spends her days as a pathologists’ assistant and a medical writer. When it doesn’t conflict with her race schedule, she plays violin in an orchestra. You can follow her on Strava and Instagram.